Essay on Impact of covid 19 on indian economy 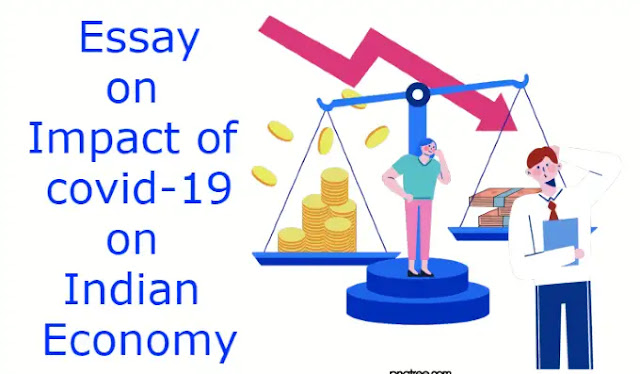 Essay on Impact of covid 19 on Indian economy

Covid-19 has impacted everyone in one or more of the way it has a minor impact on someone or major impact or someone else but the economy is the one that was most impacted by covid-19 and here I’m not just talking about the Indian economy but the economy of the entire world.

Even the economy of the developed countries like America and Russia were impacted majorly by the covid-19, so here we will talk about that how it has impacted the Indian economy what were the major sectors that were impacted by it, and where we stand today.

The economic impact of the 2020 coronavirus

The economic impact of the 2020 coronavirus pandemic in India has been largely disruptive India’s growth in the fourth quarter of the fiscal year 2020 went down to 3.1 %according to the ministry of statistics

the world bank and rating agencies had initially revised India’s growth for the financial year 2021 with the lowest figures India has seen in three decades since India’s economic liberalization in the 1990s.

on 26 may fissile announced that this will be perhaps India’s fourth recession since independence the unemployment that was already in large number in India before covid-19 has risen from 6.7 on 15 mars to 26 %on 19 April.

during the lockdown, an estimated 14 crore people lost employment while salaries were cut for many others more than 45 %of households across the nation have reported an income draw as compared to the previous year

the Indian economy was expected to lose over 32 000 crores every day during the first 21 days of complete lockdown supply chains were under great pressure even they weren't sure about what is essential and what is not.

FMCG companies that are fast-moving consumer goods companies have reduced their operations and now they're just working on focusing on essential as no one was going out during the lockdown everyone was at their home the focus of everyone was that is essential and that is what FMCG goods took advantage of.

however, on 21st March, one day after a complete 21-day lockdown prime minister Modi Ji announced that census sensing and nifty that is the index of BSc and NSC posted their biggest gain in 11 years

this was the major impact of covid-19 that we just read briefly but there are much more like they were like the tourism they were also affected mostly by the covid-19.

Effect on the Tourism sector

on the year while imports in April 2020 fell by minus 47.36 36% as compared to April 2019 since nobody was going out even the whole world was under lockdown

The sector that was majorly impacted is energy night lights and economic activities are connected in Delhi nightlight radiance fell 37.2 %compared to 1-31 March 2019, this was the biggest fall for any metro in India followed by Bangalore 32% while Mumbai dropped by 29%.

consumption of fuel was the lowest since 2007. cooking gas sales rose approximately 12%

march 2020 key exports from India fell 33 %in March as compared to March 2019. during the lockdown food wastage increase due to the effective supply chains affecting small farmers

farmers were out of money they were not able to eat proper food even for a single day they were impacted majorly by the covid-19 situation.

As we talk about the companies big companies having large market share high revenue and a high number of employees like Larson and turbo, Bharat forge, tata motors, etc.

Hindustan Unilever, Dabur, ITC shuts manufacturing facilities except for the one essential as I told you that everyone was just focusing on essentials and that what the companies took advantage of

this was the only thing from where they started they generated their revenue but that was not even enough they faced a huge loss in their revenues fall drastically in 2020, because of a covid-19 pandemic.

The next thing that comes is the stock market as I have told you that whatever happens in the economy stock market bears the consequences because they are interest-related.

On 8 April following positive indications from wall street that dependent may have reached its peak in the u.s the stock market in India rose steeply once again

by 29 April nifty held the 9500 marks but that was not enough we have seen that even with the covid-19 cases are very high in USA stock markets show variations during the covid-19 situation that is during 2020.

E-commerce sectors include Amazo,& Flipkart, etc that is our online shops now amazon announced that it would stop the sale of known non-essential items in India.

so that it could focus on needs even Flipkart, temporarily suspended some of its services on its e-commerce platform and would be selling and distributing essential only big basket and growers also ran restricted services facing description due to the lockdown.

their revenues fall drastically, even the people working under these companies even lost their jobs because the company owned cannot generate revenue for themselves.

the Delhi government has fallen 90 short in taxes as compared to 2019 and is planning to take loans and raise taxes in certain sectors, Maharashtra put a hold on all new capital worked in march

the income of the Madhya Pradesh government has fallen by 85 %in April and their borrowing increase because the state government was not having any income to spend,

Economic recovery in the second week of may companies started preparations for the starting operation some companies opened offices with the maximum permitted strength of 33.

on 24th July 2020, Ajay Bhushan Pandey the enhancement secretary of India said that the Indian economy could revive sooner than we expect

the world bank told that India is going to face a lot of difficulties it shows a million people that were going to die but the rate is still low in India and thanks to all the people and all the frontline workers that helped us.

Also read: Speech on reopening of schools after lockdown