what is the role of judiciary in india essay 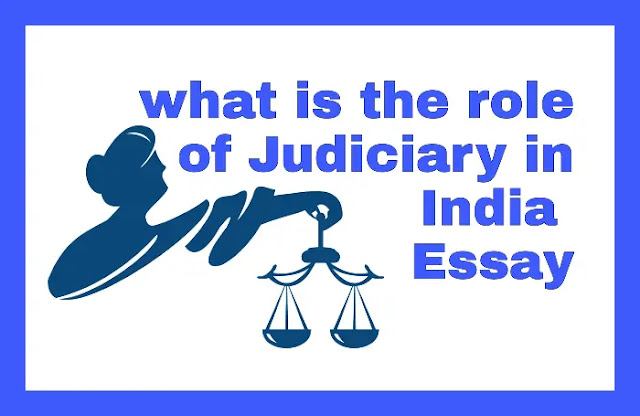 What is the role of judiciary in india essay

Three the duty-free the Judiciary is the most important organ of the government as it safeguards the rights of the people, it decides the disputes of the individuals and gives punishment to those who infringe laws but the punishment is given according to law.

The Indian judicial system is a single unified system the Constitution has provided for an independent judiciary headed by the Supreme Court below which there are the high courts at the level of the state and the subordinate courts at the district level.

All court in India function under the direction and control of the Supreme Court of India.

The Supreme Court the highest court in the country which looks into the functioning of the courts below it, if a person is unhappy with the judgment of a lower court he can move up the ladder and appeal to the higher court

the court deals with two types of cases civil and criminal all cases which are related to property matters damage of goods etc come under civil cases and the cases of theft robbery murder etc come under criminal cases.

So that judges can discharge their duties in basically without any pressure from the legislature or executive, this is the reason why judges are not appointed by the government and a hike in their salaries and other benefits are not in the hands of the government

An independent judiciary does not mean that justice is meted out arbitrarily the judiciary has to follow the rule of no it means that the same laws apply to all citizens or in other words it means equality before law.

Below the Supreme Court are the high courts at the level of states sometimes two or more states share a high court for example Punjab and Haryana, the High Court comprises a chief justice appointed by the president in consultation with the Chief Justice of India and the governor of the state

He should have worked as a judge in a court for at least 10 years or as an advocate in the High Court for 10 years or he should be a distinguished jurist in the eyes of the president, he can be removed from office by the President of India on receiving a motion passed by the Parliament.

The High put hears appeals in civil and criminal cases decided in the subordinate courts, it controls and supervises the working of the lower code it maintains a record of all its decisions and proceedings which are ported by the lawyers and judges in the support in it code

The judges of the Supreme Court hold office till the age of 65 years once appointed they cannot easily be removed from their office if found guilty he can be removed by a process called impeachment.

This is done to ensure that judiciary works independently the Chief Justice and other judges of the Supreme Court are paid handsome salaries and given many benefits and announces the objectives behind this is to prevent corruption.

Moreover when a high court reverses the decision of the lower court and a birth-death punishment and appeal can be made in the Supreme Court.

The motto of the Supreme Court of India is "tato Dharmas tato Jayah." it means wealth law (dharma) thence victory.

The president can consult Supreme Court for legal advice on public issues however this advice is not binding on the precedent.

The Supreme Court is the court of records all decisions and proceedings are recorded and printed, the lower courts in similar cases can refer to these decisions.

India's independent judicial system began under the British and its concepts and procedures resemble those of Anglo-saxon countries.

If the orders or law is in violation of the Constitution the Supreme Court can declare them null and void.

Also read:- should student not take part in politics essay

Also read:- essay on why voting is important

Also read:- what is democracy and what is dictatorship