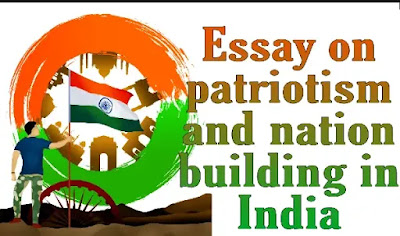 Depth of patriotism in the words of a former prime minister.

It takes a bigger form and gives a meaning in a larger perspective since in that it would not just mean to love fewer own country but the entire humanity as a whole.

When we look into wider perspective patriotism is the actual spirit that seeks supreme sacrifice for our country and enables as to step forward for doing our bit for our country.

when we look back into the history of our country many great sacrifices by Mangal Pandey, Subash Chandra Bose, Bhagat Singh and the Indian national movement led by Mahatma Gandh ji and so on Had institutionalised patriotism through different concepts

when we look into a nation-building it is a multi-dimensional concept and it involves active participation of its citizens through various walks of life in short we can say that patriotism and nation building are two sides of a coin.

A strong and powerful nation is built on dedication and hard work of its citizens and some amount of smart planning from the part of government.

we have studied many revolutions in the history of different countries like French Revolution of 1789, were liberty equality fraternity the slogan which flourished the whole world the American independence the Russian Revolution the technological revolution of the Japanese.

Every nation should have icons who have selflessly served the nation the framework of dr. Ambedkar and the formulations of our first Prime Minister Pandit Jawahar Lal Nehru made our country a role model in the nation building process in the whole world.

While we discuss about nation building and patriotism there are many challenges as well linguistic or territorial patriotism which is found so common in our country underscore narrow loyalty and at times can prove very dangerous.

We have seen from the Kargil war to the recent attack of terrorists in our border states our soldiers who protects our country had laid their lives for the sake of the people Lachman Colonel Moran Gen major Sandeep Unnikrishnan and the great hero captain vikram Batra and so on.

The alertness of government missionaries bistec administration's military police fire force task force etc controlled the situation in a praiseworthy manner and we have also seen that contributions from different states in our eyes NGOs and business groups to rebuild a new Kerala.This is how that tourism and nation-building crosley related

As long as millions live in ignorance and hunger I hold every person a traitor who having been educated at their expense and paste not the least heat to them, carrion job satisfaction education friendship entertainment are all important in one's life but it is equally important for the youth to spare a thought for the teeming millions in our country for whom two full meals a day continues to be a luxury.

Our country has emerged as the fastest growing economy in the world the massive economic growth of our economy will provide immense power on the hands of our government which will help to curb the problems related with health poverty education etc making our nation one of the greatest nation in the world.

Also read:- should student not take part in politics

Also read:- essay on why voting is important