Should state colleges are free to attend persuasive essay 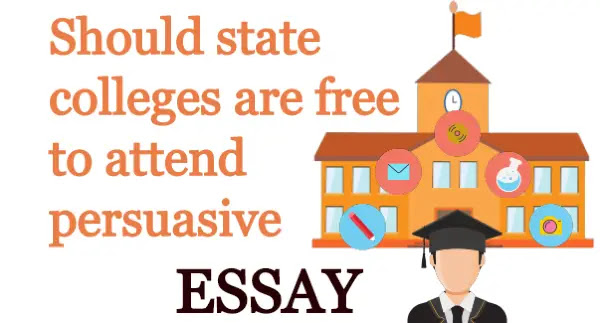 Should state colleges are free to attend persuasive essay

Have you all ever thought about how expensive universities are how much it costs you to attend a university even a community college imagine saving thousands of dollars on tuition and fees for college and avoiding student loans and having to pay back loads and loads of interest on them?

Here you are paying thousands of dollars on an education only to get a great job and pay back all you owe and more how would it feel being able to attend a State University free of cost, what the type of education be the same how would the universities pay for anything without collecting tuition and fees from students.

we are constantly being told to further our education so we can get a better job with better pay we invest so much money in our education when it comes time to start our careers the money we earn from our good-paying jobs goes directly back into the student loans are paying off our education.

As a college student myself paying for college tuition through student loans I know how much it would help financially if state universities would have free tuition and admission I currently attend a private university at a community college and I had to take out government loans as well as private loans to be able to pay for my college graduation.

I had to do a lot of my own research to be able to choose a university that would accommodate my needs as well as being able to afford I,t I also have to do a lot of research on where and from whom I would apply for student loans

According to the Washington Post, the occupy the student debt campaign is calling for free public higher education and to write offensive existing debt, so students would be forgiven of that debt that they owe on their student loans

So if we offer free admission and tuition to public universities we would be actually saving our government a whole lot of money because we wouldn't have that student debt in our modern world the cycle that we go through is to go to high school get a free college education so we can get a good job and with this good job we have to pay for our education and the interest that we owe on the student loans that we had originally used to pay for bachelor degrees.

According to the Washington Post, these steps weigh down not only the holder but the entire economy students now graduate with a burden that forecloses choices more and more are forced to work forced to return home to live marriage becomes less manageable

public interest work is less affordable and as Pam Brown and organizer with the occupy student debt campaign put it the debt makes this very individual we can't afford to help someone else how can we afford to help anyone else when we're paying off our own debt. Now that we have established that we can afford to make public universities free, let us look at

the cost of private education is going to rise in comparison to anything public where the rise in education comes an increase in a better-educated society and a better workforce not only young people but older people as well can become successful businesspeople, who are engaged with the computing community and not be burdened by debt

the idea of public education has been around for a while we currently have a public education system for grades kinder through 12th grade, free public universities we also create we'll also create a better assurance for troops coming back from war to be able to get an education and eventually move on to a better job. Now that we have seen the roots and benefits of free education for all let us look at

The downside to tuition-free universities

The quality of education is a big question university still need money to operate and function to the best of their ability considering that students will not have to pay to get an education where would the money come from, it is only less natural from what to think that certain advanced classes students would have to pay for classes that include labs special equipment and any additional materials that may cost the student

this is only because as mentioned earlier the university needs to be able to provide the equipment and resources necessary to conduct an advanced class like this, so let's say a chemistry class an advanced chemistry class that requires so many a lot of lab materials and equip where would the university get money to pay for all of this although this is a great idea for pushing students to continue their education it is only the start to getting them into college

there may be some downsides to this movement but they are small in comparison to the ways that we can make this work, free universities are not only are not as difficult as shocking as they sound according to Forbes magazine the idea of using volunteers to teach classes would help with free public universities colleges can blur the distinction between faculty students town and young.

In an online environment, there is no limit on the number of classes that can be taught and no reason to restrict class offerings to only those taught by paid employees this is called crowdsourcing who better to teach a topic

Even when automated grading is impossible reducing the cost of grading is possible by our outsourcing grading to different countries such as the Philippines in addition to using an automated system the university can be an online university, there are currently some colleges and university that are just based on online courses but students still have to pay tuition for them

If tuition became free the online option would probably become even more popular this option allows students to work with whatever schedule they have and still be able to attend school and finish with a degree, this would probably work best for working families mothers fathers people that already have a family and they would like to go back to school and finish their degree so that they can provide even better for that family

Online classes will see an increase in enrollment because those that truly want free education and cannot afford it will do anything and make any time to complete these classes and take advantage of the free University, now that you have seen an overview of the idea of free state universities it is time to wrap it up and leave you with a few ideas

So that they may have the opportunity to an attending University with much more ease than ourselves and not have the burden of debt weighing on their shoulders I hope you take this into consideration and think about.

Also read:-  Education should be free for everyone

Also read:- why female education is an important essay

Also read:- Essay on changes in education system my views

Also read:- What is your primary goal for going to school