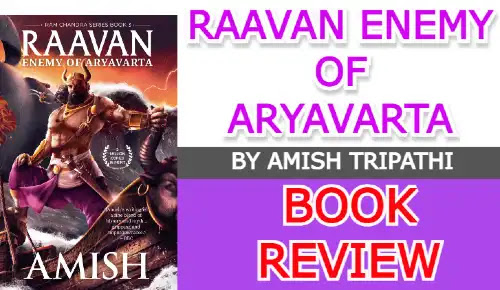 Raavan enemy of aryavarta focuses completely on Raavan life and his personality as is apparent from the name of the book itself, so this story talks about Amish Tripathi interpretation and retelling of Raavan's personality how he was as a child how he was as a teenager he became as a proper grown man

Raavan enemy of aryavarta is my favorite book in the Ram Chandra series there I have said it the kind of grip that this book had on me as a reader was something that was far more than what the other two books had.

Honestly, I had really liked Sita Warrior of Mithila but this book for me is on another level and there are many reasons for that for one I love how Raavan's personality has been fleshed out time and again in the story, you see how Raavan can be ruthless how disciplined he is and how ambitious and how focused his mind is.

For example when you read about Raavan and concurrent's equation that ends up moving you that moved me there were many times in the story that despite knowing that how cruel Ravan can be at times reading about his communication with kumbakaran brought tears to my eyes.

what makes concurrent stand apart is that despite being the brother of somebody as intimidating and as powerful as Raavan he retains his own ideals and hone principles and doesn't get swayed his love for his brother does not let him diminish his own personality.

Another thing that I have to mention is that in the story again like Amish Tripath's other books it is quite apparent that what is happening is a part of a much bigger scheme that nobody is able to see, but you as a reader are obviously privy to that because that's your advantage and that is a good value addition to the story

I had formed my own explanations and reasons for certain things in the story but as it turned out I was wrong and that made me really happy, it was really fun reading about Raavan it's really fun always to read about somebody who is so sure of himself and who is so savage that it doesn't care about anybody else.

because it's nice to get something light-hearted out of a book that is largely a serious read obviously this book talks about how circumstances lead a person to become the way he is but this book also through its,

the story conveys the message that a lot of times even those circumstances can be the reason why we turn out a certain way a lot of it is our own choice as well that is what he has shown to Raavan's character and that is a lesson that is a key takeaway from this book.

So my conclusion for this book is that the only reason for you to not pick up this book is if you hate the methodological fiction genre or if you are simply not interested in it if you do not fall in that category then there is no reason why you should not pick Raavan enemy of aryavarta because it is definitely something that you can invest your time in, so that was my review of  Raavan enemy of aryavarta written by Amish Tripathi.